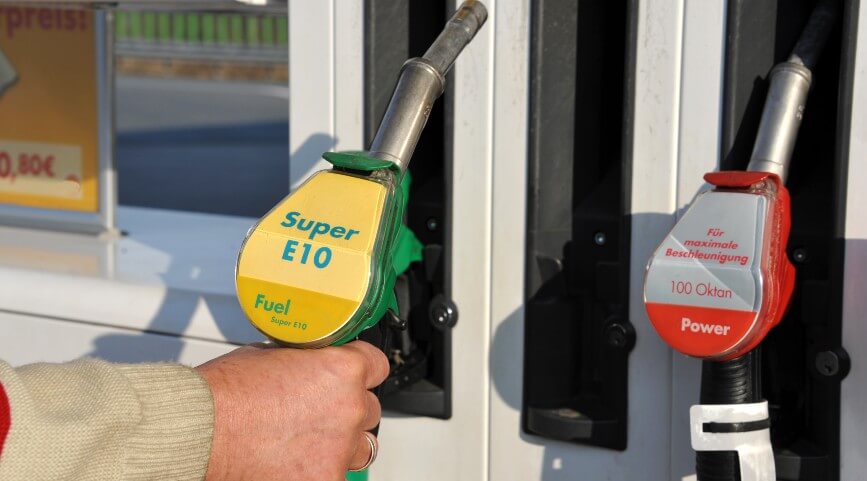 E10 Petrol: What is it and is my Car Compatible?

From September 2021, the UK introduced E10 petrol as the standard fuel available at petrol stations.

The change was made in an attempt to lower vehicle emissions and is estimated to reduce the amount of CO2 produced by cars by 750,000 tonnes per year.

Here’s all you need to know about E10, including its benefits, drawbacks and whether or not your vehicle is compatible.

E10 is a biofuel comprised of 90% regular unleaded petrol and up to 10% ethanol. This type of fuel is commonly used in other countries such as Belgium, Germany and France.

The previous petrol grades in the UK – known as E5 – contained, as its name suggests, 95% unleaded petrol and up to 5% ethanol.

Standard E5 can be used in any petrol-engine vehicle without issues or the need for modification. E10 petrol, however, is a little more complicated as a higher percentage of ethanol can be corrosive to a vehicle’s rubber parts, seals, metals, and plastics, and can even cause damage to the engine.

Ethanol is an alcohol-based fuel product manufactured from plants, including sugarcane and wheat.

Unlike standard unleaded petrol, ethanol-based fuel is said to be partially carbon-neutral. This is because as the plants which will go on to become ethanol grow, they reportedly absorb a higher amount of CO2 than will be released into the atmosphere during fuel production.

While this is thought to partially offset the greenhouse gas emissions produced by the production of E10 and therefore reduce the overall quantity of fossil fuels used on UK roads, just how effective it really is, is still a topic of debate.

This is part of the Government’s plan to tackle climate change and comes after the announcement regarding the ban on the sale of new petrol and diesel vehicles from 2023.

Are There Any Drawbacks to Using E10?

Whilst E10 fuel is thought to be greener than other existing petrol, there are potential drawbacks for drivers.

Some motor industry analysts claim that E10 might be less efficient than E5. This means that vehicles will burn up more of it to achieve the same effect, and costs will rise as drivers fill up their tanks more often.

There is also an issue with compatibility. Not all vehicles can handle the stronger percentage of ethanol and if put in an incompatible car, could cause damage to the engine.

Is my Car Compatible with E10 Petrol?

Most cars built after 2010 should be compatible with E10 fuel, however, a number of older cars, including classic cars and models from the early 2000s, will still need to use E5 fuel to avoid damaging their vehicles.

Despite the majority of cars having no issues with the new fuel, there are estimated to be as many as 600,000 vehicles on UK roads which are not compatible.

You can check your specific vehicle on the GOV.UK website, but note that it warns it will not be liable for any damage to vehicles as a result of drivers using its checker.

Regularly servicing and maintaining your vehicle is likely to extend its life and reduce the risk of damage to internal parts.

Our team have invested in specialist tools, training and equipment in order to carry out all essential maintenance, repairs and servicing on vehicles – including MOTS.

To book your vehicle in for a service or MOT, or have any further questions about E10 fuel and how it might affect your vehicle, get in touch, or call us on 01292 627 137.